﻿The results of a survey about the Java Tools and Technologies landscape, conducted by Rebellabs (Zeroturnaround) earlier this year, have recently been published.

As an early adopter of Java, we have watched the technology and peripheral technologies adapt over the years.  We’ve been focused on making sound decisions to improve our delivery to customers.

A survey such as this, not only makes us feel good about a lot of our choices by reaffirming them as good choices but also, provides an opportunity for us to possibly re-evaluate certain other choices, ensuring that we are staying at the forefront of good practice.

The report has been put together in an extremely easy to read format with various visual representations of the numbers as well as some friendly banter in the commentary, so we strongly encourage you to take a look at the report. However, if you don’t have the time to read through the whole report, here’s our summary of some of the highlights: 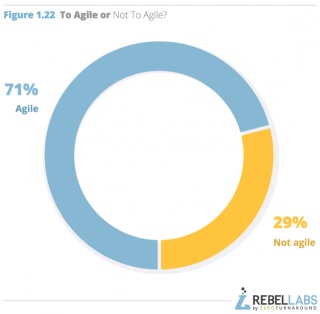 Although this question comes quite late in the survey, it was important enough to us to note it first. A whopping 71% of respondents claim to be agile in their approach. It’s well worth reading the report to see how many (and which) agile practices are actually followed though. For example, 39% of respondents state they assign tasks to their team at the beginning of a sprint and only one in five respondents (19%) claim they have well-written specifications for their projects.

We’re delighted to see that agile is being adopted more and more but we’re concerned that perhaps the interpretation of agile is not as accurate as it should or could be.

But, let’s get back to the technology adoption – and we’ll try to stick to the order of the report.

The most used JVM is Java at an overwhelming 93%.  Groovy and Scala came in at 3% and 2% respectively. We did not find this surprising – did you?

The most used Java version on main app in production? – Java 8 at 62%.  Again this comes as no surprise since it was released in 2014 (and 44% of respondents consider themselves early adopters).

For the first time, Eclipse did not come in as the most used IDE, but has been over taken by Intellij IDEA with 46% of the vote (Eclipse did screech in at a close second with 41%).

No surprises for us on the choice of build tools with Maven at the top with 62% using it as their primary tool.

Tomcat is clearly the most popular application server of choice.

Oracle DB beat MySQL as the Database of choice by a mere 1%, followed by PostgresSQL.

Spring  is the most dominant web framework with Spring MVC  a clear winner, leading at 43% and Spring Boot coming in at 29%.  What’s interesting here is that Spring was only created in 2014.

Jenkins takes the cake with a whopping 60% as the CI server of choice, followed by Bamboo with a mere 9%.

68% of respondents indicated their favour for GIT as a VCS, pushing Subversion SVN down to a mere 23%.

At Symbiotics we adopted Java as our platform of choice in 1997.  We’re proud of the work we produce and we believe in sharing our knowledge and experience within the community.  Take a look at our blog, which includes some excellent tutorials for Maven, Spring, Jenkins and more. Visit our blog to see what you can learn.

The original report can be found on Zeroturnaround’s site:

How to Avoid feature creep through UX

Becoming a Business That Will Survive the Internet Age: Lesson 6
Scroll to top