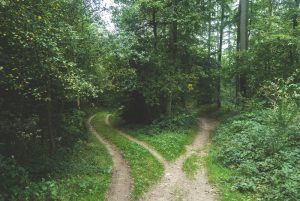 The famous American poet, Robert Frost, at the end of his poem “The Road Not Taken”, wrote:
“I shall be telling this with a sigh
Somewhere ages and ages hence:
Two roads diverged in a wood, and I—
I took the one less traveled by,
And that has made all the difference.”

Interpretations of this stanza in context aside, the implication is clear. Don’t take the safe option. Take the “road less traveled”.

This was the decision I had to make 15 years ago. My school aptitude tests, unhelpfully, advised that I was equally qualified for any line of study I wished, so I had to make a choice between my two top professions: law, or programming. I believed both directions to be based on logical rules; structures that could be applied and built on. And as a young person does, I made a decision based on the questionable advice from people with no experience in the matter, and I finally opted to study law, as the “safe” option.

I enjoyed studying law. Unfortunately, after finishing my LLB degree and starting my career, I regrettably realised the reality is far removed from the logical, clear cut world of my studies.

Where I believed drafting laws and contracts would be an exercise in iron clad logic, I soon realised that law consisted heavily of differences in interpretation, opinion, and argument.  An emotional world of grey, often far removed from logic. Where I hoped to construct, build and weave, I found myself largely fighting. Rarely creating, usually quarreling.

But what can you do? I was an adult by then. I had responsibilities. Bills. Debts. This was my life now. I was too far down Robert Frost’s road I had chosen, to turn back.

Or was I? I had another choice to make.

I decided I would pay off my debts, save every cent I could, and start studying again. With the help of my friends, family, and the love of my life, I will throw caution to wind, give up the decade of legal experience and salary promotions I have accumulated, and start at the bottom of the ladder again.

Symbiotics gave me this opportunity. As much as I took a risk in pressing the reset button on my career, Symbiotics took the risk with me, and gave me a shot. A peculiarly underqualified-overqualified novice developer.

It has been less than a year since I started down this new road. A road, like most of life’s ways, that is never completely as you expected it to be. But so far, not a single day has gone by that I am not wholeheartedly convinced, and thankful, that I had made the right choice this time. A choice I would make again in a heartbeat if I had to.

Software development, at least in the experience I have been fortunate enough to have had at Symbiotics, gives me what I had hoped to get from law. I create. I solve. I help to build the proverbial house, instead of simply putting out the fire.

Starting over is hard. This cannot be overstated. Socially, financially and mentally. But, as the cliché goes, nothing worth having comes easy. And this new life, this new road, definitely is worth having.

Returning to Mr Frost, this time in context, it is clear that in his final stanza quoted above, he was in fact only later taking credit for arbitrarily choosing a road, he did not know the outcome of.  Earlier in the same poem, he wrote:
“And both [roads] that morning equally lay
In leaves no step had trodden black.
Oh, I kept the first for another day!
Yet knowing how way leads on to way,
I doubted if I should ever come back”.

So I argue that Frost, in fact, does not know that the road he chose was truly the best, because he could only choose one.

I therefore dare say I have one up on Mr Frost,

for two roads diverged in a wood, and I—

I chose to travel both roads,

That has made all the difference.

Finding the silver lining in the cloud
Scroll to top