When onboarding staff at Symbiotics, we run a comprehensive induction training session that typically lasts about two weeks.  During this time, new staff members are provided with their laptops that they are expected to configure and set up themselves.  Our experienced developers share their knowledge of both our internal processes and those of our customers to familiarise the ‘newbies’ with as much as possible in terms of expectations. Naturally, everything that they learn ties back to our core values.

After our most recent induction training, we asked our delegates to put together an article that would explain their impressions of the two weeks. We felt that the article that follows was too good not to share. 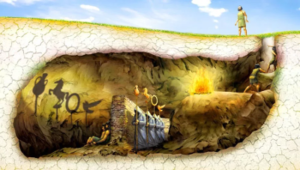 Plato’s Cave is an allegory used by the famous philosopher, where he compares normal people to prisoners chained to a wall in a cave for their entire lives. These prisoners only know the outside world through the shadows projected on the blank wall in front of them, coming from objects passing in front of a fire behind them.  Plato goes on to compare the “philosopher” to a prisoner who is freed from the cave and comes to understand that the shadows on the wall are not reality, but mere vague representations of the true world. Prisoners more often than not do not wish to escape their cave, because it is safe and familiar.  They cannot comprehend the vastness of the real world outside the cave they know.

This allegory I have found very fitting in describing my time so far at Symbiotics, and in particular the induction training.

I personally do not come from a technical background.  I have always had an interest in the IT field, and after years I have finally managed to find the opportunity to leave my previous field (law) in order to pursue a career in the technology field.  Like many, I only knew what I have read, experienced and spoken about thus far, and while I knew that my picture of the technology world was limited by my very modest experience, I could not have understood before coming here the vast difference between the shadows I have come to know, and the technology world outside.

Fortunately, like Plato, Symbiotics has reached out to me and my fellow trainees, and has endeavoured to show us (at a very high level) a view of the technologies and tools which we will need to succeed in this brave new world.  While overwhelming, and a lot more information than can truly be internalised during the short training period, I believe the purpose of  the training was more to open our eyes to the possibilities, opportunities and state of mind required in the field (and in particular at Symbiotics), rather than to put these tools in our hands and teach us to use them.

That task is the next step.

During the week and a half long induction, Symbiotics also set out their own culture and worldview.  Having been in the working sphere for a number of years already, being exposed to a company that legitimately cares about its employees’ personal development is both liberating and humbling.  It creates a sense of pride, as well as a sense of purpose and duty which I am very glad to have found again.

Preparing for my training at Symbiotics, I was scared about the future, because I did not know what to expect.  Having had our brief introductory training, I am now absolutely terrified, because I now know how much I do not yet know.  But I am excited because I am certain that I am at the best possible place to learn what that is.

So now onwards to the rest of my life I will crawl, out of my cave, learning to walk in the light.