Keeping your grit together

When Joe[1] was around ten years old, he was unexpectedly selected to participate in an inter-house athletics event. Specifically, he was to run the 400m individual race. Now, this was unexpected in large part due to his lack of athletic prowess; he was, if not actually podgy, quite shapeless. 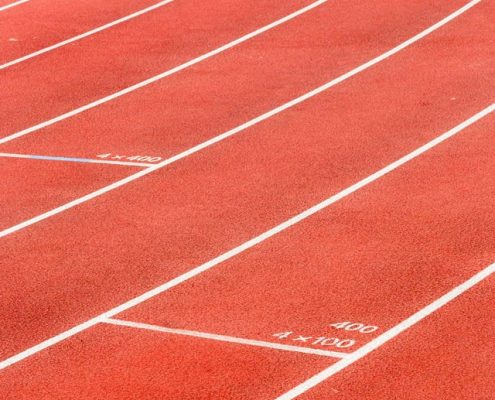 When the big day dawned, and, through the course of time, his event, he was beset by unfamiliar reactions in his body: a churning in the stomach area, a numbness in the bodily extremes, and an inability to focus on the immediate, trivial interactions with others. Finally, the starter prepared them, and they were off.

Joe could feel his cheeks moving in rhythm with his loping gait as he turned the first corner at his best speed. This sensation was almost immediately joined by a deepening sense of dismay; not only was he last at the second turn, but the gap between him and the bunched runners ahead was palpably widening. After the third turn, when he was about a third of the field behind the rest, he suddenly developed a limp, and, with dramatic hand held to heaving chest, he bailed out.

As Joe walked diagonally across the field to the now-deserted finish line, and then beyond that back to his family, his eyes dragged themselves along the grass. Reluctantly, he raised them to meet the steady gaze of his father, and no words were said. Nor were they necessary.  The shared disappointment formed an incongruous bond between the two, and amplified the shame burning through the exertion-induced rosiness of cheek.

There has been a lot of talk over the last couple of years about the concept of grit. Angela Duckworth brought it to the forefront of the collective consciousness through her seminal Ted Talk in 2013, wherein she postulated that grit was a better predictor of success than IQ, or social intelligence, or even good looks. She defines grit as “passion and perseverance for very long-term goals”.

I believe that grit is as fundamental to success in the arena of software development as in those that Ms Duckworth has studied in depth. Without perseverance, specifically, it is impossible to succeed. Skills like language knowledge, debugging, reading a stack-trace, Googling, and attention to detail are all vital in solving problems, but without perseverance, they count for naught. Passion for one’s vocation underpins this by providing the motivation to succeed when the going gets tough, while the long-term goal may be to continuously deliver high-quality software.

Ms Duckworth references another theme that has become prevalent in modern thinking around the capacity to learn: the growth mindset, as defined by Carol Dweck, in opposition to a fixed mindset. The former mindset accommodates continual learning, and views failure as a springboard for further growth, while the latter assumes that who we are is a static given, and cannot be changed or improved.

The growth mindset certainly supports my view of grit and its place in software development. My favourite addendum to an admission of ignorance is the word “yet”: I don’t know how to do that. Yet. This opens up the infinite possibilities available to us if we are only prepared to learn. Which includes the ability to acknowledge that we don’t know everything. Yet.

That willingness and openness to learn must be accompanied by an ability to stick with the current challenge and see it through, often in the face of opposing forces. Tenacity is a critical characteristic in meaningful triumph.

I have a very fond memory of a particular problem that I inherited in an environment that was building a complex framework; saving of data was core to the solution, and all the unit tests worked, but there was an untraceable bug that caused the records not to be written to the database in the actual runtime.

37 hours later, at around 2AM, I found the problem: there were two different references to the Hibernate jar on the classpath, and the annotation that triggered the persistence was subsequently failing the “equals” test.

The two seconds of epiphany were born from continued, focused application, and a stubborn refusal to be defeated. I walked into the work environment that morning, haggard and unkempt, to virtual applause and adulation (“virtual” in that it was all in my own mind; the mild acknowledgement of my achievement was still sufficient to keep the fires of my passion alive).

When Joe[2] graduated from primary school to begin his secondary education at a boarding school, he was subjected to many more compulsory demands on his physical abilities. One of these took the form of the biweekly Bounds run. This was a run around the school boundaries for a distance of about three kilometres.

On the very first instance of this, Joe ran with the Form V assigned to him as a mentor. Being naive and unathletic, Joe had no inkling that his mentor was quite adept at running. Consequently, he vomited bile on the 2.5km mark. But while still in motion. He continued, and finished that inaugural run alongside his mentor, earning his begrudging respect.

To my mind, grit is simply the ability to persevere when it would be easier not to do so. To push through the pain, and finish. And to acknowledge that, while there are people around you to assist and guide you, it is ultimately your responsibility to see the task through.

So how does one get one’s grit together? Part of the beauty of grit is that it can be learned, assuming that you do, in fact, adopt a growth mindset. It can be made into a habit, so that it is your default behaviour, rather than an awkward, unfamiliar alternative. How do you achieve this? Like all habits, through repetition.

Challenge yourself to deliberately choose the harder options when you face decisions about trivial things, and it becomes easier to do the right thing when you encounter more serious dilemmas. Park a little further from the entrance; forego that ABF; replace the empty toilet roll. Refuse to walk when you embark on a run, no matter how pedestrian your pace becomes. (There are common-sense limits to this, of course. I certainly do not advocate anything that will cause medium- to long-term damage to your body.)

But how do you make it through the hard option? 10 seconds at a time, according to the unbreakable Kimmy Schmidt. In essence, you break it down into increments that you know you can get through. And then you get through them, one increment at a time.

I also frequently find comfort and fortitude in the Persian adage: this, too, shall pass. No matter the depths of despair within which we find ourselves, the circumstances will inevitably and inexorably change. This is, of course, as much a vital reminder to enjoy the good times while they last as it is a mechanism to cope with the bad.

Building the habit of making hard choices, and persevering through the tough times, will enable you to keep your grit together. And that will help to make you someone that I, for one, would want to have besides me as a team member.

Joe[3] is now in his late forties. He has been running ParkRuns for the last four years, and, prior to the lockdown, had missed exactly three events: one due to a trip to the hospital for a loved one, one due to a stubborn cat that caused a delayed road-trip, and one because he was still very drunk when it was time to start. Apart from these exceptions, he has deliberately and consciously made the choice to persevere and complete that weekly challenge, in spite of having no love for running at all.

Joe is trying to keep his grit together.

6 Reasons Not to Write Unit Tests

Is serverless really the best way forward?
Scroll to top